The Owl and the Pussycat - special commission 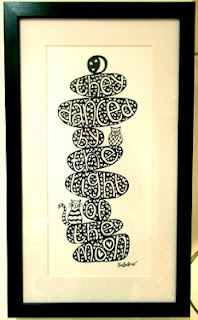 This is a commission I did recently for a very lovely couple I met at a Showcase event I took part in. It was for an anniversary present and is an illustrated line of poetry from The Owl and The Pussycat. I'm pleased to say the recipient loved it, and I must admit, I really did enjoy the research and doodling I did with the owl and pussycat images, something departing from the 'bird-norm', and a rather refreshing change...

If you would like something like this commissioning for someone you know then  please get in touch for a quote. I'll also be taking commissions in February when I will be the Artist in Residence at the very first Nottingham Festival of Words, 16th and 17th February at the Newton Building at Nottingham Trent University. A selection of my word-inspired work and limited edtion prints will also be available so please come and say hello.
Posted by sue bulmer at 07:00 1 comment: 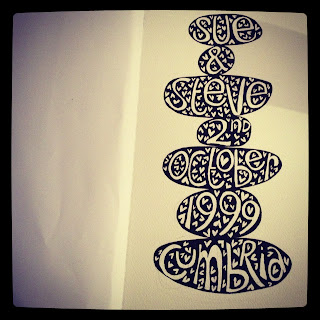 With my work being based upon themes of love and romance, along with the fact that my Wedding Cake Print was my best-seller of 2012, I have decided to explore the Wedding Market in 2013 and have developed this idea for a personalised wedding gift. I'd love to hear your feedback.... I took this with me to my last selling show and showed it to several customer who asked about commissions. Feedback was very positive but I'd also love to hear your thoughts on it....

Customers will be able to order these as commissions, personalised for the couple tying the knot, the one-off original hand-drawn artwork will include names of the couple, date and location of the special occasion, hand drawn in ink on 250gm2 (110lb) Grain Fin Cold Pressed NOT watercolour paper measuring 400x200mm, and will come framed and mounted and signed by the artist (me), 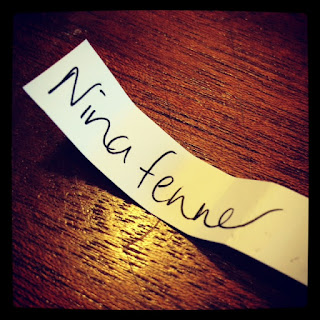 I've just done the draw on the Alternative Art Journal Give-Away and the winner is Nina Fenner. Congrats Nina, and thanks to everyone who took part and left me a comment about your sketchbooks and journals.

Keep your eyes peeled for the December Book Review, coming soon
Posted by sue bulmer at 11:53 No comments:

Getting to know my customers.... 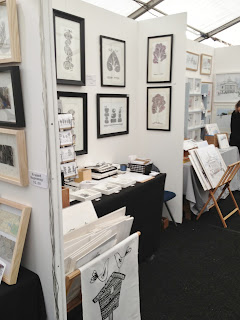 Here are a couple of pictures from my one and only Christmas Fair this year, it was the Harley Christmas Market up near Worksop in North Notts and I was there last weekend. I made sure I had my thermals on as the weekend was a chilly one, but it didn't affect how much I enjoyed it.

Considering that when I first started out on my creative journey I never thought that I would ever make work that was good enough to be chosen to exhibit at such a fab event. My last two applications were turned down so you can imagine how thrilled I was to get in this year. I'd visited as a customer several times over the years but seeing it from the other side, you never know how it will turn out. The attendance was high, people were spending on Christmas gifts and also for themselves, I was well-prepared, having taken part in a couple of selling events and showcases this year and I was determined to learn as much I could from the whole experience. I used to think that the ideal way for me to sell my work was through galleries, it was easy for me, I didn't have to spend all weekend trying to do it myself and I could get on with making new work while the galleries did their bit. Having had a few substantial sales I then got curious, and questions started popping up making me wonder who is parting with their hard-earned cash to buy a piece of my work?

So I decided to start selling direct to customers, handpicking my events carefully, and not applying for anything and everything. Now I'm no seasoned professional, don't get me wrong,  I only have a couple of such events under my belt, but I think selling direct, if you choose your locations well, can be a great way to get to know a LOT more about your customers and what makes them tick. I made a few notes over the course of the weekend, in between sales and chatting, and gained a valuable insight into my customers.

This is what I learned (and hopefully some of this might be useful to you):

- I realised my work had broad appeal: I got really positive reactions from children, one customer saying that my stand was the only one her child had said they liked, and also older customers showed a lot more interest than I had expected, proving to me that my potential customer base is actually a lot broader than I had previously thought. I need to make sure I tap into this next year.

- My work makes people smile: It was great to gauge peoples reactions to my work as they stepped in closer for a proper look and I was pleased to see it brought a lot of smiles to peoples' faces. This is something I will incorporate into my marketing and use to sell my work to future customers. I like the fact it makes people happy!!

- Market research: I had advertised commissions and had taken along with me a commission piece which I hope to advertise for the wedding season next year. I'm going to blog more about this later in the week. I asked my customers whether they liked it and got lots of positive feedback. Customers are more than happy to give feedback, use this to your advantage, and ask them, it's free and a great way to find out what people like and want.

- I also took along a sketchbook to work on, which helped make the time fly, and also provided something of interest for customers, and a great lead into a conversations. Children, particularly, seemed fascinated in what I was doing, stopping to watch and asking questions. I also had three new pieces of work to bring home at the end of the weekend!!

- Setting out you stand: I could write a whole blog post on this, but I'll keep it short, people are more likely to browse through prints and special offers if they are further away from where you are sitting. To begin with had my special offer print box right next to me and no-one was looking. I moved it to the other end of the table and all of my prints sold! Which brings me to my last point:

- People don't like the hard sell: I don't like the hard sell either, so I don't do it. If people make eye contact I acknowledge them and smile, but on the whole I found that customers wanted to be left alone to browse and would initiate a conversation if they wanted to. Taking some work along with me also made this bit easier, I felt I had something else to concentrate on, and my customers didn't feel as though they had to interact if they didn't want to. There are some who may contest this and state it isn't the way to sell things, but I found it worked really well, to take the softly softly approach and leave people to browse, always being aware of them, but not intruding.

Anyhow, thats about everything covered. It was a great learning curve, yet again, and very positive. Hope it has been a useful insight.

It would be great to hear what works well for you at your selling fairs, so please feel free to leave me a comment and share your tips and ideas